Have you ever told someone something not true, and then shouted "April Fools!"?

April Fools' Day is an annual observance on April 1. On that day each year participants play practical jokes or tell big whopping lies. Then, when their victim falls for their nonsense, the first person shouts out "April Fools!", which is intended to make the victim feel abashed for falling for the original silliness. The victim becomes the "April Fool" and the perpetrator laughs.

So where did this very odd custom come from?

Some historians date the custom to ancient Roman times and a festival cycle called the Hilaria. During Hilaria, a multi-day holiday celebrating the fertility goddess Cybele and the resurrection of her son Attis, there was much merriment and the playing of tricks on one's co-celebrants. The Hilaria were originally celebrated twice a year: in November and at the spring equinox and the renewal of life. Not far from "Hilaria" to our word "hilarity"!

Other historians point to 16th century France and changes in the calendar. In the Julian calendar, New Year's Day was in April. In 1564 King Charles IX had his country change to the Gregorian calendar, and in this system the first day of the year is January 1. This was not a popular decision, nor was news about the edict easily communicated to all of his subjects in those pre-internet days. Those who didn't get the message, or believed the king shouldn't interfere, were mocked. They were called Fools. In modern-day France people who fall for these lies or pranks are called Poisson d'Avril, which means "April Fish".

Today, the USA, Poland, Lebanon, Israel, France, Italy, Belgium, the Scandinavian countries, Ireland, and the UK all have some version of April Fools' Day, each with their own "foolish" customs.

Although most hoaxes played on April Fools' Day are small-scale and mild, some have been implemented on a much larger scale:

In 1957 the British Broadcasting Corporation had a TV program showing people harvesting spaghetti trees. On April 1, 1998 a radio announcer from England called South African president Nelson Mandela claiming to be Prime Minister Tony Blair. On April 1 in 1996, Taco Bell, the fast-food chain, took out ads in 7 newspapers, announcing that they had purchased the Liberty Bell. And just last year on April Fools' Day mutual-help website StackOverflow updated its homepage with unicorns and sparkles. 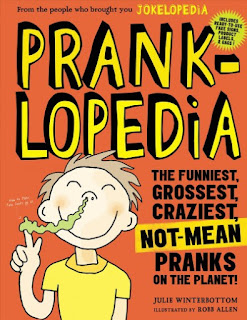 But on April 1 this year, be kind to your friends and colleagues: with COVID-19, we have enough on our shoulders.
Posted by Melody@TheLibrary